CAROLINE ROSE HUNT, MOTHER OF THE CRESCENT AND THE MANSION, DIES AT 95

The philanthropist, hotelier, author, world traveler, gourmet, entrepreneur, mother of five, grandmother of 19 and great-grandmother of 23 was 95.

“My mother changed the complexion of the city,” said her only daughter, Laurie Harrison. “She bought land in an area that nobody wanted to be in and created The Mansion on Turtle Creek. She took something that was historical and made it useful and beautiful. She took 13 acres that was a car lot and created The Crescent — one of the most beautiful Philip Johnson buildings in America.

“My mother lived three or four lifetimes in one. She was something else.” 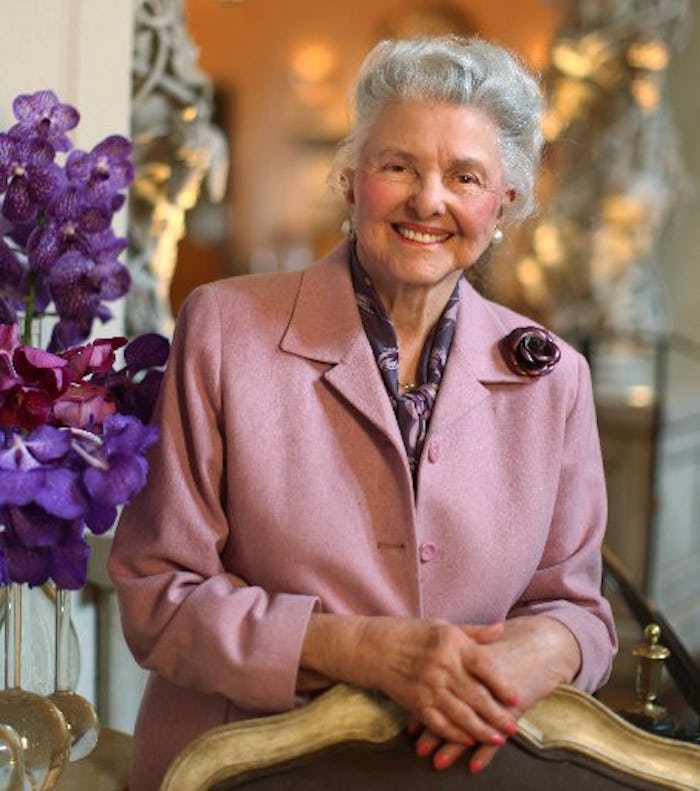 After H.L. discovered the massive East Texas oilfield, the family moved to Tyler and then to Dallas and the now-famous Mount Vernon along White Rock Lake in 1938. The J.R. Ewing character in TV’s superhit Dallas was modeled after H.L.

In the early 1980s, Caroline Hunt’s Rosewood Corp. began assembling a tract of land just north of downtown that would anchor the company’s signature development, the Crescent, and later Rosewood Court.

Her net worth at its height in the late 1980s was about $1 billion — more than $2 billion in today’s dollars — and also included the Rosewood Mansion on Turtle Creek and Hotel Bel-Air in Los Angeles.

In recent years, Hunt was squired by Robert Brackbill Sr., who will turn 100 next summer.

She dropped Schoellkopf as her last name after their divorce in 1987, preferring Mrs. Hunt in formality. But mostly she was known as Caroline in her hometown of 50 years. Her grandchildren and great-grandchildren called her Moozie.

Hunt was never one to seek the spotlight and rarely gave interviews. Her last was with The Dallas Morning News. That story ran a year ago — almost to the day.

When she was proclaimed the wealthiest woman in America, she gave interviews to The Dallas Morning News and The New York Times  but reportedly turned down 60 Minutes.

It's impossible to know just how much Caroline Hunt was worth when she died.

Like her father, who was the Jeff Bezos of his day, she held such matters close to her chest.

Rosewood — owned by the trust established for Hunt in 1935 by her father and mother and run by others — still has vast holdings in ranching, real estate, investment funds and oil and gas, and it buys and sells turnaround companies.

But Hunt's legacy on her beloved Big D is indelible. There was no Uptown until she came along.

"The city of Dallas has been the recipient of the results of my Aunt Caroline's love of beauty," said Dallas billionaire businesswoman and philanthropist Lyda Hill, whose mother, Margaret Hunt Hill, was Caroline's sister. "Rosewood's projects are elegant with superb architecture and art that reflect her grace and sense of style. The renovation of the Mansion on Turtle Creek preserved a beautiful old home and gave Dallas a grand hotel. The Crescent development renewed a deteriorating area on the north side of downtown and produced a shining star that became a beautiful entry into downtown Dallas."

John Zogg of the Crescent said, "Several of our employees started their careers with her, and her passion for top-quality customer service is the bedrock that drives Crescent's culture today. "

"Caroline Hunt was raised in the age of steel magnolias -- beautiful, charming and powerful," said the partner of Billingsley & Co.  "She was the quietest, boldest and most creative lady in real estate in the city. Her eye for excellence and beauty and her ability to deliver on both created the magic of the Rosewood brand."

Hunt graduated from the Hockaday School in 1939 and attended Mary Baldwin College in Staunton, Va., during her freshman and sophomore years. She received a bachelor of arts degree in English and art history from the University of Texas in 1943.

Hunt's first job at the family oil business was in the mailroom of Hunt Oil. 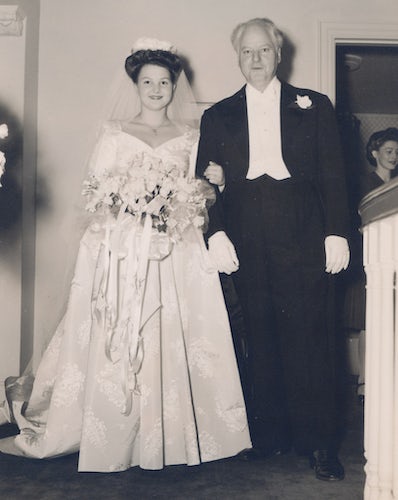 Rosewood Corp., which she founded 42 years ago, got into the hotel business in 1979 when it converted the Sheppard King mansion into The Mansion on Turtle Creek.

In August 1989, Hunt stunned the hotel world when Rosewood Hotels and Resorts sold its Hotel Bel-Air in Beverly Hills to a Japanese company for $110 million, or a record $1.2 million per room. That was followed in quick order by another sale to Japanese investors — the secluded luxury resort Hana-Maui Hotel in Hawaii and surrounding 4,500 acres for a reported $200 million.

Rosewood Hotels had 18 owned and managed properties by 2011, when the umbrella company sold its hotels and interests in the Crescent to a Hong Kong billionaire.

When Harrison, 62, executive director at Rosewood Corp., asked her mom why she'd agreed to sell the family's crown jewels, she received one of her mother's well-honed pieces of business advice.

"She goes, 'Laurie, I told you, don't get emotionally tied to any one line of business,' " Harrison recalled. " 'Business is cyclical. And now is the time to sell. We've got a Chinese [tycoon] getting ready to overpay. Besides that, you children can buy it back for 30 cents on the dollar in about 15 years.' "

Hunt's unofficial title at Rosewood was "the guiding spirit."

Don Crisp was one of Hunt’s first employees at Rosewood Corp. more than 40 years ago and served as its president and CEO until he retired in 2015.

“We had both a business and personal relationship, but I think of her first of all as a dear friend,” he said. “She genuinely cared for people and made those around her feel valued and respected.”

He said that Hunt was actively involved in the company but always sought out the opinions of her family and management. “Caroline had a keen mind and was a very practical person with a lot of common sense, so when she did offer opinions, we listened very intently,” he said. 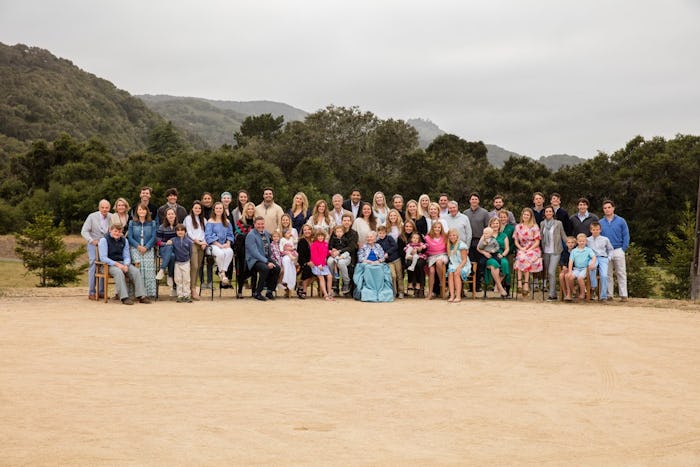 For the last 15 years, the stakeholders of Rosewood Corp. have gathered for an annual family retreat to absorb Caroline Hunt’s core values. Harrison said that tradition will live on.

“The most important word to my mother was integrity,” Harrison said. “She thought that should be in every aspect of business and relationships. My mother’s favorite quote was ‘Happiness is not a destination, but a way of traveling.’ "

In her later years, Hunt was extremely hard of hearing and lost most of her eyesight to macular degeneration, but she continued to go to her Uptown office almost daily, hosted a women's Bible study in her office every Monday and kept an active social calendar that included having lunch and dinner with friends and family. She had planned to attend a Dallas CASA event before she was felled by the stroke on Halloween, according to Dallas book agent and close friend Dedie Leahy, who had been working with Hunt on her memoir for several years.

Twinkle in her eyes

When the Texas Business Hall of Fame wanted to honor her in 1999 — along with former president George H.W. Bush — she accepted but with the stipulation that the organization recognize her entire family.

She received countless awards reflecting her service and contributions to business and the arts and honoring her focus on philanthropy, both personally and through her leadership at the Rosewood Foundation.

Over the years, she quietly spread her largesse to innumerable causes dear to her heart, including Dallas CASA, United Way of Metropolitan Dallas, the Retina Foundation of the Southwest, the Junior League of Dallas and the Crystal Charity Ball.

Hunt became involved with United Way after World War II when she went door to door in her neighborhood collecting donations for the Dallas Community Chest, which evolved into United Way. Her contributions to the charity included co-chairing the Alexis de Tocqueville Giving Society in 1990 and 1994. In 2013, United Way presented her with its greatest honor, the J. Erik Jonsson Award.

"Mrs. Hunt told us she was drawn to the mission of Dallas CASA because she had a wonderful childhood and felt deeply for vulnerable children who do not," said Kathleen LaValle, CASA president and CEO. "Through her endorsement, Mrs. Hunt helped bring attention to the plight of child victims of abuse and neglect, making it possible for us to serve many more children who need constant, caring advocates to be their voices in the courtroom and the community."

Hunt was also a longtime advocate of the Dallas Arboretum and spoke last year as part of the opening for its new edible garden, A Tasteful Place, which she thought was a fabulous idea.

"She was a beautiful woman, inside and out, and always had a twinkle in her eyes," said Mary Brinegar, CEO of the arboretum. "She loved the beauty, the design and of course the flowers of our garden. She will be sorely missed."

In her interview last year, Hunt reflected on how she nearly burned down the family house in Tyler when she was little by leaving her toy electric range turned on in the attic, and how she flipped her Chevy into White Rock Lake when she was 16. After that watery incident that only injured her pride, Hunt never liked to drive or had any interest in cars.

She had a reputation for having a spunky wit and for being frugal yet refined when it came to food, clothing and her way with words.

She was an accomplished gourmet cook and the author of a novel, Primrose Past: The 1848 Journal of Young Lady Primrose, published by Harper Collins in 2001, and a cookbook, The Compleat Pumpkin Eater, published in 1980. One of its 440 recipes — banquet elephant stew for 3,882 people — was dropped into the middle of the book as a ruse.

"I love humor, and that was one of my made-ups," Hunt said.

Asked what her favorite pumpkin dish was, she responded, "Actually, I like raspberries better."

How did she become so infatuated with pumpkins? 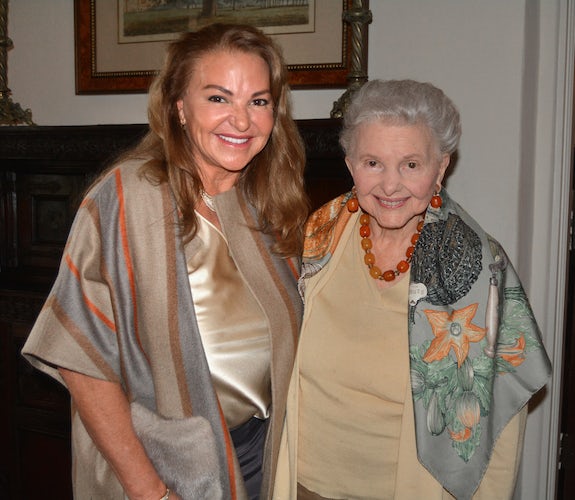 Hunt wanted to come up with a way to use the cast-off innards from her kids' jack-o'-lanterns, so she started developing her own recipes. And she loved the color of pumpkins.

When Hunt and her second husband, the late Buddy Schoellkopf, an experienced World War II pilot in the South Pacific, started a helicopter charter company, he honored her by naming it Pumpkin Air.

"My husband must have been a little bit colorblind, because he painted the helicopters bright orange. Colorwise, I like everything more subtle, as you can tell," she said, holding up a silk scarf of softly hued pumpkins.

"My mother was not only loved by her immediate family but by the extended family as well," says Harrison. "Everybody loved my mom."

Hunt was a 50-year member of Highland Park Presbyterian Church and its first woman deacon.

Return to Press
^
back to top